What do Harry Truman, George W. Bush, and Pinot’s Palette® franchisees Ray and Heidi Leonard have in common? They all served in the National Guard. While the former presidents may have focused on national security and foreign relations, Ray and Heidi are learning to focus on local community and customer relations as owners of the South Hill, Washington Pinot’s Palette.

But Ray and Heidi haven’t left their day jobs. The couple met in the Army National Guard, were deployed on two tours together, and still serve in full-time capacities– Ray as a facility commander and Heidi as a deputy financial manager.

When the couple first stumbled on Pinot’s Palette, they were just looking for a date night. But they enjoyed their experience and thought that an upscale paint and sip in Puget Sound was a great idea. The opportunity gave them a seamless exit strategy from the National Guard.

Ray and Heidi started their franchise through Pinot’s Palette’s VetFran program, which is a national initiative that encourages franchises to offer veterans financial discounts, mentoring, and training as they pursue opening a franchise. Over 650 franchise brands participate in the program, and Pinot’s Palette is proud to count veterans among its successful franchisees. And the program is helping veterans find jobs — more than 6,500 veterans have become franchisees (across all franchises) since 2011.

Pinot’s Palette offers veterans a 20 percent discount on the initial franchise fee. Ray and Heidi appreciated the discount! Heidi thinks that recruiting veterans stands to benefit the Pinot’s Palette franchise as a whole. “Maybe they’ve realized veterans rule and realize that veterans have the administration skills and organizational discipline to drive sales,” she says.

The leadership team of Pinot’s Palette has realized exactly that. In an interview about VetFran earlier this year, president and co-founder Charles Willis said, “We’ve found that the veteran’s way of assessing and tackling problems is invaluable to the strength of our system.”

With their crazy schedules including Pinot’s Palette ownership, parenting an infant and a toddler, and wrangling two mastiffs, Ray and Heidi knew they had to hire a full-time manager. In fact, one of the couple’s favorite aspects of business ownership is the chance to provide jobs to others. But Ray and Heidi’s day-to-day still includes marketing, scheduling, and special events. “We have a full-time manager but he primarily manages the artists… We’re still very involved.”

And they’ve embraced the challenge of partnering in business ownership. “We’re the same rank so there’s not a whole lot of issue in our day job,” she says, “And in working with him for the franchise, it’s been good. We’re partners in everything. It’s been overwhelmingly positive.”

Though their experience has been largely positive, Ray and Heidi acknowledge that there have been bumps along the road to franchise ownership. “It was a huge challenge, the learning curve just to get to opening with construction, permitting, and licensing,” Heidi says.

But they persisted in seeking to create a welcoming space for the community. “We want to make sure we make a place that is worthy,” Heidi reflects. With the grit and determination born of years of military service, Heidi advises potential franchisees that “This is not for the faint of heart. If you want it, then work for it.” 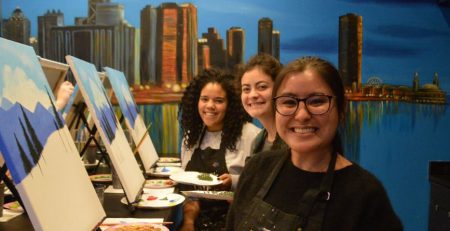 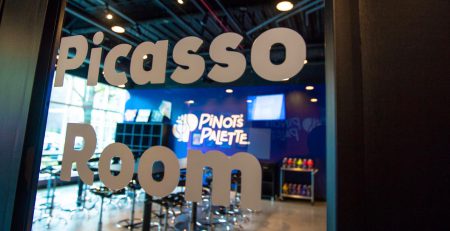